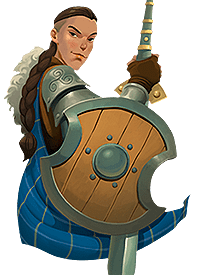 Humans are the most common race of people, and they are also the most diverse. There is no one human culture or way of life. The Celts are the main human race represented in The Waylanders, but as the seat of a thriving empire with trade routes that extend well beyond the continent of Europe, Brigantia has always been home to people of many different beliefs, nationalities, races, and ethnicities. 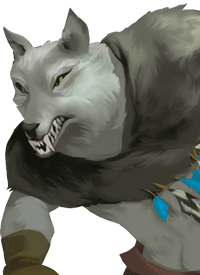 Part-human, part-wolf: in the world of the Waylanders, instead of transforming from a normal human into a monster during the full moon, werewolves maintain their ferocious appearance at all times. You can’t become a werewolf- they’re born that way. All werewolves are distant descendants of the lupine Tuatha, Lug. Unlike the Tuatha, they are mortal. Some look almost completely human, but with a bit more fur and paw-like hands, while others appear indistinguishable from wolves, but with the intelligence of a human. The majority are somewhere in between. 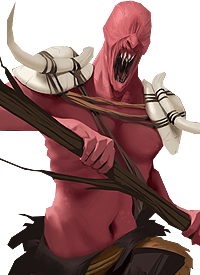 The Fomorians are a race of monstrous immortal giants who once ruled Ireland. When the Tuatha came to power, they banished the Fornorians to a small corner of the Mourian Underworld. The Fomorians have been in exile for thousands of years, biding their time until they have an opportunity to retake their ancestral home. Half-Fomorians are the offspring of these titans: less monstrous in appearance, but just as fearsome. 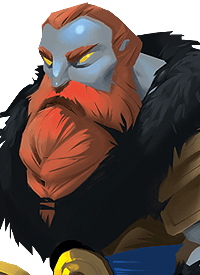 The Mourians are an immortal race with dark skin, golden eyes, and a penchant for both fate-based magicks and intellectual pursuits. After centuries living amongst humans and other surface-dwellers, most Mourians have grown tired of mortal affairs, and have developed thriving communities of their own in the Underworld and the Medulas. They are an elegant, wise people who have learned to value close personal relationships and quality goods. 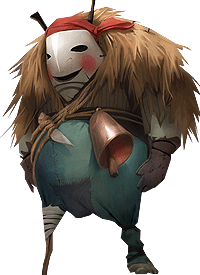 Goblins may be cute and playful, but beware- this magickal race can cause an immense amount of damage due to their penchant for pranks and shocking lack of empathy. They will do whatever they find interesting and entertaining without a thought for each other, or anyone else. Because of this, they make a delightful member of an adventuring party, but rarely find themselves welcome in polite society. However, nearly every human neighborhood claims to have a resident goblin… whether they actually do or not.

The Fomorians are a race of monstrous immortal giants who once ruled Ireland. When the Tuatha came to power, they banished the Fomorians to a small corner of the Mourian Underworld. The Fomorians have been in exile for thousands of years, biding their time until they have an opportunity to retake their ancestral home. Though they initially could live in peace outside of the Underworld, humans began hunting and killing Fomorians as a display of heroism, equating them not to people, but to common monsters due to their fearsome appearance and ability to regenerate.